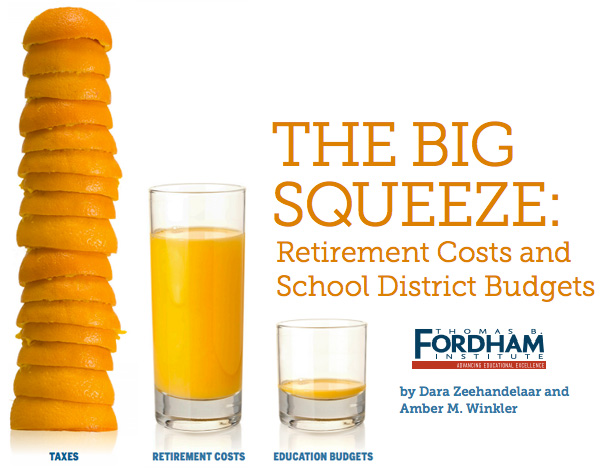 [Milwaukee, Wisc…] Milwaukee Public Schools (MPS) would have spent an additional $105 million in fiscal year 2020 (FY20) due to rising retirement costs, but the district will save $101 million of that sum thanks to Act 10, according to a new study.

The report published by the Thomas B. Fordham Institute, The Big Squeeze: Retirement Costs and School District Budgets, takes an in depth look at the increasing costs for district’s retirees, including MPS.

Not only do the Act 10 savings keep costs down for MPS, they could actually ensure that hundreds of teachers do not lose their jobs. According to the study, if MPS had to make up these savings without Act 10, they could choose to fire over 1,000 teachers by FY20.

Another option MPS would have is to cut compensation costs for teachers. Without Act 10, the average teacher could have seen a salary and benefit reduction of $24,127, which is about 24 percent of the $99,762 in total compensation.

The study does point out that MPS would most likely cut costs across different areas without Act 10. The study says:

“What might have been the impact on the district’s budget without Act 10? It would depend on how MPS opted to distribute the costs. If it did this proportionally across its major expenditure areas, in FY20 it would have to cut $57.9 million from classroom instruction, $18.9 million from instructional support, and $21.0 million from operations.”

The authors of the study, Dara Zeehandelaar and Amber M. Winkler, say that “Act 10 obviously makes and enormous difference,” but caution that MPS still has other budgetary predicaments.

They point to the pay-as-you-go policy that MPS follows for retiree healthcare, “meaning that current-year contributions from the district are used entirely to pay for the current-year benefits for retirees.” This will eventually lead to a problem where current MPS employees may not be able to contribute enough to cover the costs for retiree benefits.

Zeehandelaar and Winkler suggest that MPS begin “banking money” to cover the eventual costs of retirees from the baby boomer generation because the payroll support is shrinking while the amount of retirees is increasing.

The study also looked at the Cleveland Metropolitan School District and the School District of Philadelphia with the help of economist and pension expert Robert Costrell and education finance expert Larry Maloney.

The full study can be seen here.