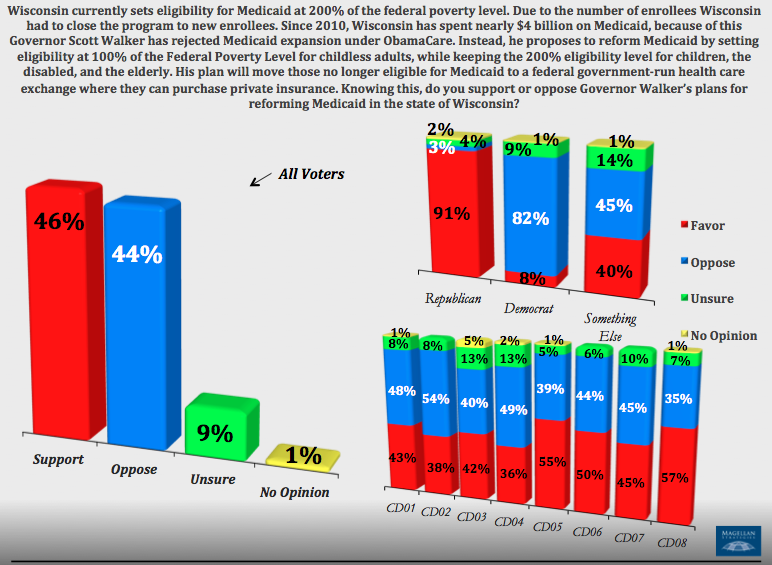 [Madison, Wisc…] When asked if they support or oppose Governor Scott Walker’s plans to reform Medicaid in Wisconsin, 46 percent of voters said they support Walker’s decision, while only 44 percent say they oppose it, according to a new poll.

Walker rejected the Medicaid expansion in his budget in order to reform the program. The Governor’s plan would lower the Medicaid eligibility limit to 100 percent of the poverty level for childless adults and allow those above that limit to enroll in the private insurance exchange set up by the Affordable Care Act.

According to Walker, his reform will cover more people than the Medicaid expansion and will save Wisconsin money in the long run.

The topic has been hotly debated between Republicans and Democrats in the legislature, and the new poll suggests a very strong partisan divide. In Wisconsin, 91 percent of Republicans support the Governor’s rejection of the Medicaid expansion, while 82 percent of Democrats oppose it.

Another strong majority of voters are concerned about the uncertainty of the federal government’s promise to cover the costs of the Medicaid expansion.

Congressman Paul Ryan, Chairman of the House Budget Committee, previously warned states about relying on the federal funding for the expansion. “The fastest thing that’s going to go when we’re cutting spending in Washington is a 100 or 90 percent match rate for Medicaid. There’s no way. It doesn’t matter if Republicans are running Congress or Democrats are running Congress. There’s no way we’re going to keep those match rates like that.” Ryan said in an interview with the Chicago Tribune.

A 57 percent majority of voters were somewhat or very convinced that the federal government’s contribution to the Medicaid expansion in Wisconsin would not last forever.

In other results on the survey, a majority of voters found the following arguments opposing the expansion somewhat (SC) or very convincing (VC):

64 percent (43 VC/21 SC) – “Because there is so much disagreement among experts on the costs of expanding Medicaid, we shouldn’t rush into any expansion until we have a better handle on the financial consequences.”

56 percent (27 VC/29 SC) – “The cost of expanding Medicaid would leave less money for other needed state services and programs, like education, public safety and environmental protection.”

53 percent (27 VC/26 SC) – “If expanded, Medicaid would become an unreasonably large program, covering as many as one in three (1-in-3) residents of the state.”

The survey was conducted by Magellan Strategies for the MacIver Institute and the Liberty Foundation of America from May 15-16 with 838 likely general election voters with a margin of error of +/- 3.39 percent at a 95 percent confidence interval.