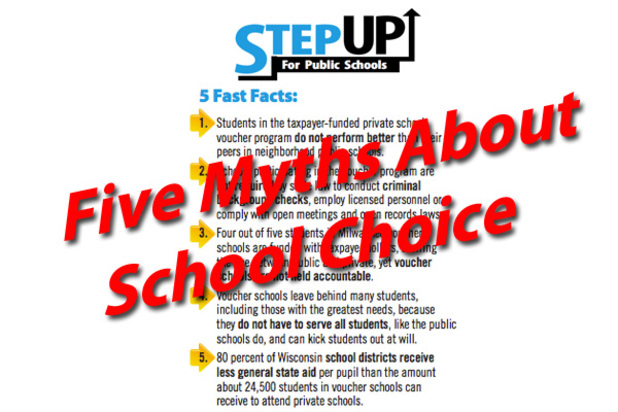 Step Up for Public Schools Provides Misleading Information About Vouchers

Recently, Step Up for Public Schools (SUPS) released a pamphlet titled “The Truth about Vouchers and Privately Run Charters.” Unfortunately, a better title for their flier would have been “Half-Truths.” SUPS raises several tired talking points about school choice in Wisconsin that have been repeatedly debated, disproven, and regurgitated over more than two decades of voucher discussion.

Today, we’ll break down their “Fast Facts” on how the Milwaukee Parental Choice Program and the Parental Private School Choice Program (Racine) have affected education in the Badger State. While there are also some interesting statements about non-instrumentality charter schools (the same schools that regularly outscore both regular public schools and instrumentality charter schools in Milwaukee, we’ll save that for another day. Let’s look at what the SUPS has to say about Wisconsin’s voucher programs.

1. Students in the taxpayer-funded private school voucher program do not perform better than their peers in neighborhood public schools.

A: In more than 20 years of operation, there has only been one apples to apples comparison of student growth between similarly matched students from MPS and the Milwaukee Parental Choice Program (MPCP). That study – the School Choice Demonstration Project (SCDP) – showed very few statistically significant differences between the two groups of pupils. What they did find was that voucher students were 4-7 percent more likely to graduate, attend a four-year college, and stay in that college than their peers. While factors like parental involvement may have played a role, the study strongly suggests that these schools were a significant force behind the improved attainment of the students that chose vouchers.

One thing is clear – there’s no evidence that these voucher schools are hurting students, despite having only 50 percent or less of the funding that their traditional public school peers have had in Milwaukee. As the state’s data collection and standards improve and we learn more about student growth and the impact that individual teachers have, we’ll develop a better understanding of where MPS and MPCP schools stand in terms to serving students on a year-to-year basis.

2. Schools participating in the voucher program are not required by state law to conduct criminal background checks, employ licensed personnel or comply with open meetings and open records laws.

A: Voucher schools, with less than half the funding of regular public schools, are held accountable by the parents and students they serve. Without a cache of neighborhood students who are geographically tied to their classrooms, they need every student that they can find in order to keep their doors open. Every student that chooses not to attend their school puts them one step closer to closure.

As a result, parents have the ultimate accountability over these institutions – if they are unhappy with the education provided in these schools, they have the power to leave. If enough parents feel that way, these schools will become unsustainable, and quickly. With 80 percent of these students bringing in meager, state-based tuition funding, every student plays a key role in keeping the lights on in these schools.

Additionally, Governor Scott Walker expressed hope that the state’s new School Report Cards could soon apply to voucher schools. These grades would give these institutions an accountability score on par with the regular and charter public schools in Wisconsin. This aspect is something that legislators and the Department of Public Instruction have been working on with voucher school officials for several years. With stronger standards and better measurements for student growth on the horizon, a more comprehensive method of grading voucher, charter, and traditional public schools may just be a year away.

4. Voucher schools leave behind many students, including those with the greatest needs, because they do not have to serve all students, like the public schools do, and can kick students out at will.

A: Voucher schools need every student that they can find in order to gain funding and keep their doors open. For evidence of this, just take a look at what happened in Racine’s first year with a voucher program. Rather than taking just the cream of the crop, Racine’s private schools enrolled a significant number of voucher students that lagged far behind their peers. This was confirmed by WKCE results, which measured how much students knew in October of 2012 – only one month into their tenure at their new private schools. These students scored significantly lower than the students that stayed at RUSD, suggesting that the students that needed a new educational environment the most were the ones that got it.

In terms of special needs students, the SCDP suggests that special education numbers are severely understated in private schools. Since these schools don’t require Individualized Education Plans (IEPs), many students with disabilities are not reported to the state. The SCDP Year Five study suggests that there are at least four times more special needs students in the MPCP than DPI reports have suggested.

Furthermore, suggesting that private schools have more power to remove students than public schools is a myth. Public schools have always had the power to expel students, and losing students, especially with the state’s declining enrollment count, is a blow that public schools can absorb more easily than most private institutions in the MPCP or PPSCP. Voucher schools, which are already spread thin thanks to low tuition numbers set by the state voucher, are often in a more perilous position when it comes to losing students and the funding associated with them.

5. 80 percent of Wisconsin school districts receive less general state aid per pupil than the amount about 24,500 students in voucher schools can receive to attend private schools

The MacIver Institute will continue to fact check the budget debate rhetoric as a service to our supporters. For live updates from the Joint Committee on Finance and the Legislature, follow us on Twitter at @MacIverWisc.