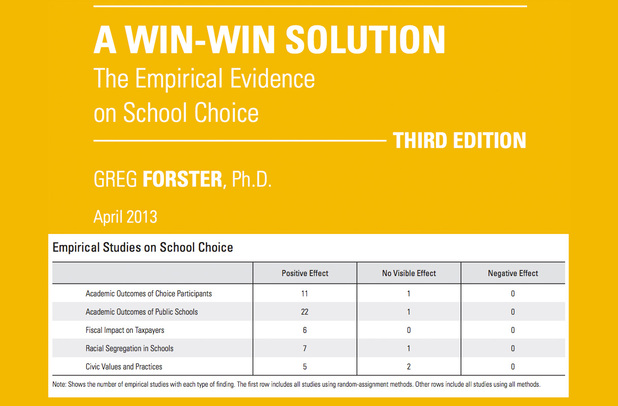 A look at 46 empirical studies has found numerous benefits for students, public schools, and local taxpayers thanks to school choice programs across the country. More importantly, there have been no significant negative effects for students as the result of voucher and tax-credit scholarship programs.

That is according to the Friedman Foundation’s Dr. Greg Forster, who released the third version of his study A Win-Win Solution; The Empirical Evidence on School Choice, on April 17. Forster reviewed several high-quality studies that examined the impact of school choice programs on five key factors: academic outcomes for choice students, academic outcomes in public schools that have to compete with choice programs, fiscal impacts on taxpayers, and racial segregation and civic values amongst students. Of these studies, the majority find positive impacts for the major components of school choice – students, schools, and taxpayers.

“These results are not difficult to explain,” writes Forster. “School choice improves academic outcomes by allowing students to find the schools that best match their needs, and by introducing healthy competition that keeps schools mission-focused. It saves money by eliminating administrative bloat and rewarding good stewardship of resources. It breaks down the barriers of residential segregation, drawing students together from diverse communities.”

This echoed the results of Forster’s first two studies on the subject. Both found several positive outcomes as a result of voucher and tax-credit scholarship programs, but no evidence of negative influence at an empirically sound level. Twelve studies used random assignment to observe student achievement between choice and regular public schools. Six of these studies found benefits to all students, while five found benefits to some students and one found no discernible impact between the two groups.

This analysis had similar outcomes in the other four factors as well. Of the 23 studies that examined how students performed in public schools that were affected by choice, 22 found improvements in the classrooms that had to compete with choice programs, while only one study found no significant impact.

Six studies looked at the impact of choice on taxpayers, and all six found that these programs provided a net fiscal benefit to residents.

Eight studies looked at segregation in regular and choice classrooms; seven of these studies found that students were more likely to move from a more segregated classroom to a less segregated environment through school choice, while the eighth suggested that there was no net effect.

Forster’s latest version of the Win-Win study echoes a point that MacIver made recently; that there is no empirical evidence that shows that any students – public or private – have been negatively affected by school choice programs. With 41 school choice programs now operating in 22 states – and more on the horizon – this wealth of data will only grow.

Wednesday’s release goes deeper into some of the categories that had already been discussed by Forster to examine some of the social effects of school choice. Students that moved from regular public school classrooms to private school classrooms were likely to encounter a more diverse environment than they had previously been in. These pupils were also more likely to have strong civic values and respect for classmates than their peers.

Of 46 studies, 41 found positive gains as a result of school choice programs. Five found no visible effect from their presence. None found a negative relationship between choice and outcomes like student achievement, fiscal impacts on taxpayers, or segregation in the classroom. While some of these benefits were modest, part of the reason for their limited impact can be traced back to the relatively small scope that they have when it comes to affecting students thanks to enrollment caps and geographic limitations.