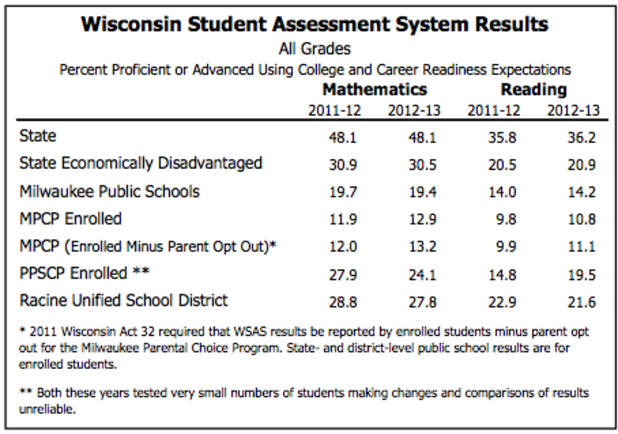 [Madison, Wisc…] Wisconsin’s proficiency rates took a big hit in 2012-2013 thanks to more stringent standards on the WKCE. Fewer than half of the state’s students met national benchmarks in mathematics – and that figure fell to just 36 percent when it came to reading. This is a significant difference from the grades that Wisconsin students turned in under the old standards, which suggested that nearly 80 percent of all pupils were proficient in reading in 2011-2012.

These new, more demanding proficiency levels are an attempt by the Department of Public Instruction to better gauge the effectiveness of our education system when preparing our children for either college or a career after high school.

The data from this year’s version of the Wisconsin Student Assessment System (WSAS) covers test scores from both the WKCE and the Wisconsin Alternate Assessment for Students with Disabilities (WAA-SwD). As a whole, the state fared poorly – less than half of Wisconsin’s students rated at “Proficient” or better in the mathematics category. Scores were even worse in reading, where fewer than two out of every five students met expectations.

These scores are much lower than the state’s average proficiency rates for previous years. In an effort to gauge progress, the Department of Public Instruction has converted 2011-2012’s scores to this new measurement system to allow for accurate comparisons of growth between the two years.

These averages sagged significantly for the state’s economically disadvantaged children, and that impact rippled through two of the state’s largest districts – Milwaukee and Racine. Students in these districts fell well below the state’s average in both reading and mathematics. These scores dipped even lower for the voucher students in these districts, but improving achievement scores show that pupils who are utilizing choice are making strong gains compared to their public school counterparts.

Even with these new, more rigorous requirements, the state’s voucher students saw modest gains despite low proficiency scores in math and reading. While Milwaukee Parental Choice Program students lagged behind the Milwaukee Public Schools average, strong growth numbers in these voucher schools are a positive. MPS students showed a slight overall regression and MPCP students’ scores improved by at least 10 percent in these major categories.

The difference in WSAS proficiency scores between traditional public school and voucher school students may raise a few eyebrows in the midst of another year of debate over the effectiveness of school choice.However, Racine’s first-year results strongly suggested that a big part of why choice students lag behind their public school peers is because they enter voucher schools at educational levels that fall behind their classmates.In 2011-2012, the first year of private school choice in the city, Racine’s voucher students scored significantly lower outcomes than the students that remained in the city’s public schools.

These students had all come over from public classrooms and had only received a month of instruction in their new schools. These low scores suggest that Racine’s Parental Private School Choice Program was doing anything but “creaming” the best students from their public schools. The PPSCP was working to serve some of the city’s lowest performers when it came to proficiency levels on the WSAS.

Now, for the second straight year, voucher students in Wisconsin have recorded significant improvement on state standardized testing while their local districts have stagnated or slumped.These low-performing students have made gains compared to their public school peers, helping to close the gaps between the two groups even after data has suggested that they started in different positions.

The gap in reading scores shrank from 4.1 points to 3.1 points between MPS and MPCP students. In math, this difference went from 7.7 points to 6.2. In Racine, the reading gap shrank from 8.1 points to 2.1. However, with only 174 tested students in the PPSCP this year, volatile swings may be more indicative of a small sample size than the overall impact of the program. That’s why following this progress in 2013-2014 will be an important piece of research in the everlasting school choice debate.

These gains continue a trend that Wisconsin saw in 2011-2012. That year, MPCP schools saw an average reading proficiency increase of nearly two percent. While overall scores took a tumble in the face of new, tougher standards, the choice program’s outcomes continued to improve in 2013.

Interestingly, gains in choice schools on WSAS scores seemed to tail off in later grades for all students in reading and math. MPCP students improved their reading scores in every grade from three to eight, but saw a 1.4 point decrease when tests were administered to 10th grade students. A similar outcome was observed in MPS’s high schools as well. The implementation of new, ACT-based testing in grades 9, 10, and 11 should help shed more light on this problem and give students a higher-quality test to gauge their work.

New, more rigorous standards should have the state’s schools, students, and parents concerned, but they also paint a more realistic picture of how Wisconsin’s pupils are performing and how prepared they’ll be for the next level of their education. The state’s voucher students are lagging behind their public school peers, but they are also growing at a faster rate, according to state testing data. However, modest improvements may not be enough, especially when fewer than 15 percent of the students at MPS are proficient when it comes to reading.