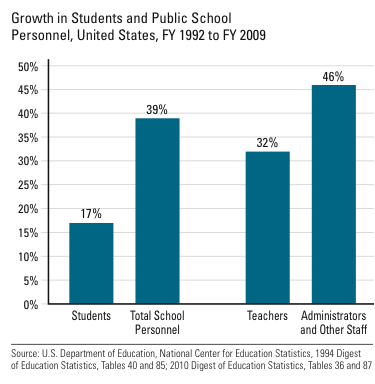 [Madison, Wisc…] A recent study by The Friedman Foundation analyzed the rise in public school personnel compared to the increase in students between Fiscal Years (FY) 1992 and 2009.

The Friedman study shows that while the number of K-12 students in the United States increased by 17% during that time, the number of school employees rose by 39%. Teachers experienced a 32% growth rate while administrators and other staff rose by 46%. In just those seventeen years, the growth rate of non-teaching personnel was 2.7 times greater than the increase in students

The study also compares the United States to other countries in the Organisation for Economic Co-operation and Development (OECD) in order to put U.S. education spending into perspective. The OECD includes 33 other developed countries dedicated to global development. Current members include countries in North America, Europe, Australia, Korea and Turkey.

Despite all the increases in staff, there is no evidence that American public schools experience higher student achievement compared to other OECD countries, or when examining the years before the staffing boom.

Included in the study is a breakdown of how each state’s educational system has changed. From 1992 to 2009, 48 states grew school personnel at a faster rate than their increase in students. Wisconsin is one of those 48 states.

If the ratio of non-teaching personnel had remained constant between 1992 and 2009 and the growth in teachers had only been 1.5 times larger than the growth in students, public schools would have an excess of $37.3 billion to spend each year.

The undeniable fact of the matter is that administrators and non-teaching personnel are being hired at a much faster rate than the growth in student population, putting a strain on tax dollars and increasing government spending.

According to 2012 polling data by the Thomas B. Fordham Institute, a majority of Americans (69%) favor “reducing the number of district-level administrators to the bare minimum” as a “good way to save money without hurting classrooms.”