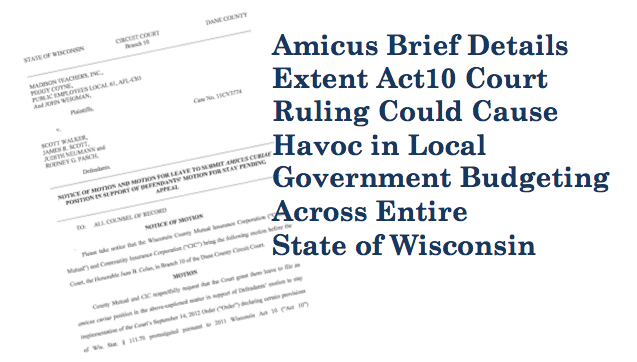 Dane County Circuit Judge Juan Colas struck down Wisconsin’s government labor reforms, known as Act 10, on September 14. The state is appealing his decision, and DOJ lawyers seem encouraged by the fact the State Supreme Court has already upheld it once before.

In the meantime local governments are trying to produce their budgets for next year under very tight financial restraints. Now the unions are demanding everything back they lost over the last year and a half, from sick leave payouts to lower insurance premiums.

“There’s less money coming from the state, and we don’t have the ability to tax more,” Attorney Andy Phillips told the MacIver News Service. “So every dollar we have to spend on personnel, we have to cut from somewhere else.”

The counties wanted Judge Colas to stay his decision until the fate of Act 10 is determined in higher courts. Under the current situation, counties are finding it nearly impossible to plan their budgets and deal with the unions. In the brief, Phillips argues that Colas essentially rewrote Act 10 in order to strike it down.

Phillips states that the judge’s decision could put local governments across the state in financial jeopardy.

“Limiting collective bargaining freed counties, municipalities and school districts to make necessary changes to costly benefit packages such as health insurance and other programs without having to provide a quid pro quo for the changes,” the brief reads. “This, in turn, facilitated the ability of counties, municipalities and school districts to maintain employment levels while still meeting the ever-increasing service demands of their taxpayers and citizenry.”

“In the end, the resources expended defending claims can be better spent on providing services to the citizens that rely on counties, municipalities and school districts.”

Judge Colas, denied acceptance of the amicus brief on Tuesday, saying the applicants did not offer any new perspective to the case.

“We just wanted to get our statements on the record,” Phillips told the MNS before the judge announced the denial.