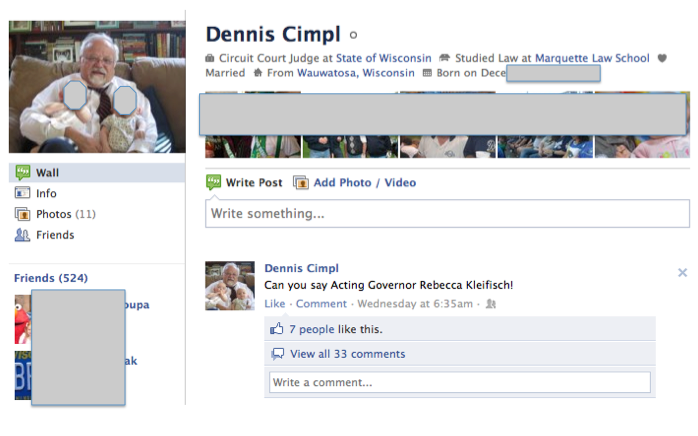 [Milwaukee, Wisc] Does a Facebook posting and the subsequent comments to it reveal that the judicial deck in Milwaukee County is stacked against Governor Scott Walker?

Misspelling of her name notwithstanding, the post seems to infer that Lt. Governor Kleefisch will be elevated to Governor at some point in the future when the Governor leaves office mid-term. Several of the Judge’s Facebook friends provided comments affirming their belief that the Governor will be charged as a result of the two-year John Doe probe currently being conducted by Democratic Milwaukee County District Attorney John Chisholm.

The Landmark Legal Foundation has already called for an investigation of Cimpl and more than two dozen other judges for signing the petiton to recall Walker last year.

The Gannett newspapers conducted an investigaton that uncovered the fact that 29 judges signed the petitions.

According to Landmark Legal’s complaint:

“The Preamble to the Wisconsin Code of Judicial Conduct, Supreme Court Rule (SCR) Chapter 60, makes very clear that judges are to be held to the highest standard for ethical conduct:

“Our legal system is based on the principle that an independent, fair and competent judiciary will interpret and apply the laws that govern us. The role of the judiciary is central to American concepts of justice and the rule of law. Intrinsic to all provisions of this Code are the precepts that judges, individually and collectively, must respect and honor the judicial office as a public trust and strive to enhance and maintain confidence in our legal system. The judge is an arbiter of facts and law for the resolution of disputes and a highly visible symbol of government under the rule of law.”

Rick Esenberg, president and general counsel of the Wisconsin Institute for Law & Liberty, and former faculty member of the Marquette University Law School, said the post is troubling.

“He’s making, what appears to be, a partisan comment on judicial proceedings,” said Esenberg. “I think it’s, at best, unprofessional for a judge to make public comments to be rooting for someone to be charged with a crime.”
However, when reached for comment, Judge Cimpl said his Facebook posting was not improper. He laughed at the notion that the post had anything to do with the Doe probe.
“I think Scott Walker is going to be Mitt Romney’s running mate,” Cimpl told the MacIver News Service. I think that’s the biggest impact of this recall, that she has a real shot at being governor. Honest to God, that’s what was in my mind when I wrote that.”
However, Esenberg’s assumption that the liberal judge’s comments pertained to the ongoing and supposedly secret John Doe proceedings were echoed by Cimpl’s friends.
“Next Journal Sentinel headline: WALKER INDICTED!!!” wrote Barb Marcum whose profile reveals she works in the “Wisconsin Courts.”
At 2:25 pm on Wednesday, Heidi Galvan replied to Cimpl’s post, “i know how sad once walker gets charged we have to deal with her!!!”
According to this LInkedIN profile, there is a Heidi Galvan who formerly served as an Assistant District Attorney in Milwaukee County and currently serves as an Assistant CIty Attorney for the City of Milwaukee.
“I have no clue what’s going on in the John Doe investigation,” Cimpl insists.
Clearly his friends, including many that appear to be in the judicial system with Judge Cimpl, assume (perhaps hope) he does.
MacIver News Service will have more reaction to this story as it continues to develop.