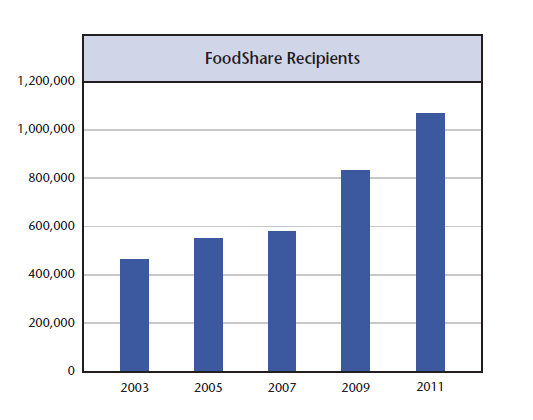 “We appreciate the work LAB has done for this evaluation,” said Department of Health Services Secretary Dennis Smith. “Thanks to the commitment of Governor Walker and the Legislature to make investigating fraud a priority, the Department has made important progress to improve the integrity of the FoodShare program, including the creation of the Office of Inspector General, implementing a new Fraud Prevention and Investigation (FPIP) model, and working to pursue vendor fraud.”

The LAB identified state prison inmates who received FoodShare benefits while incarcerated and estimated that 293 of these inmates received $413,000 in benefits.

The report also identified recipients who are ineligible because they are fleeing to avoid prosecution or incarceration for a felony offense, or violating a condition of probation or parole. LAB estimated that 847 of these individuals received $1.4 million in benefits.

Legislators were quick to react to the audit’s findings as well.

“The audit findings confirm that improvements in oversight are needed in the FoodShare program,” said Rep. Kerkman. “The findings are not surprising to me, because they confirm what I have been hearing from the citizens of my district about suspected abuse of FoodShare benefits.”

Secretary Smith said his Departments efforts to find and crack down on fraud will continue.

“We also will use this information to ensure that the people who receive the benefits are using them in an honest way and we’re continuing to work with the USDA to pursue vendors who may be defrauding the system.,” said Smith.

State officials say increase in program participation over the past several years was due to the economic recession and policy changes implemented by the Department of Health Services (DHS) during the Doyle Administration that made it easier for individuals to apply for and receive benefits.

In 2011, 1.1 million individuals received $1.1 billion in federally funded FoodShare benefits, formerly referred to as food stamps. That is a significant increase in the number of FoodShare recipients from 2003 when there were 462,204 in the program. (See chart)

“While we understand that the FoodShare program is necessary, we want to make sure that benefits are being given to those that qualify to receive them,” said Sen. Rob Cowles (R-Green Bay). “The release of this audit is very timely as we have been working to ease the burden on taxpayers, and we must keep in mind that a program as large as this must be held accountable so that we know how taxpayer money is being spent.”

The LAB also found that recipients who appear to have intentionally violated program rules are often not disqualified from receiving future FoodShare benefits. In addition, they found that county fraud consortia have thus far failed to improve fraud prevention efforts.

The LAB recommended the Department of Health Services report to the Joint Legislative Audit Committee by December 3, 2012, on