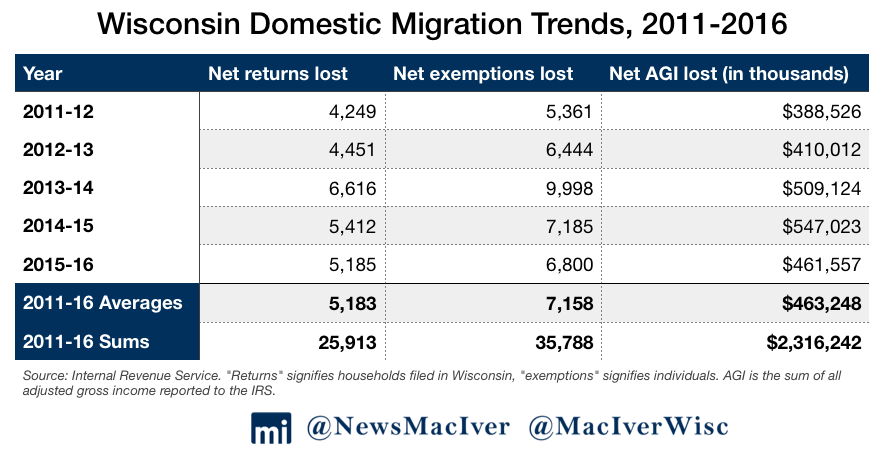 Tax migration has hit the Badger State hard. It’s time for the state to step up and take the battle for population growth seriously.

Thousands of Wisconsinites leave the Badger State every year, taking millions of dollars with them – a bleak trend highlighted by recent Internal Revenue Service data. An average of $463 million left the state annually from 2011 to 2016, according to tax records.

Between 2015 and 2016 alone, 5,185 fewer households filed tax returns in Wisconsin. Total adjusted gross income – all the income that Wisconsinites reported – fell by a shocking $461 million in that year alone. Wisconsinites are leaving in droves, and they’re taking their nest eggs with them.

If Wisconsin is to succeed in the 21st Century, it must step up its game to become both a regional and a national beacon for new residents and businesses. What Wisconsin lacks in physical warmth, it should make up in the welcoming warmth of our people. We need new ideas to keep our young people here, to attract new talent for our unfulfilled job openings and to keep our retirees from moving south permanently.  We new strategies that make it clear that everyone – yes, even those pesky Chicagoans – should move here. 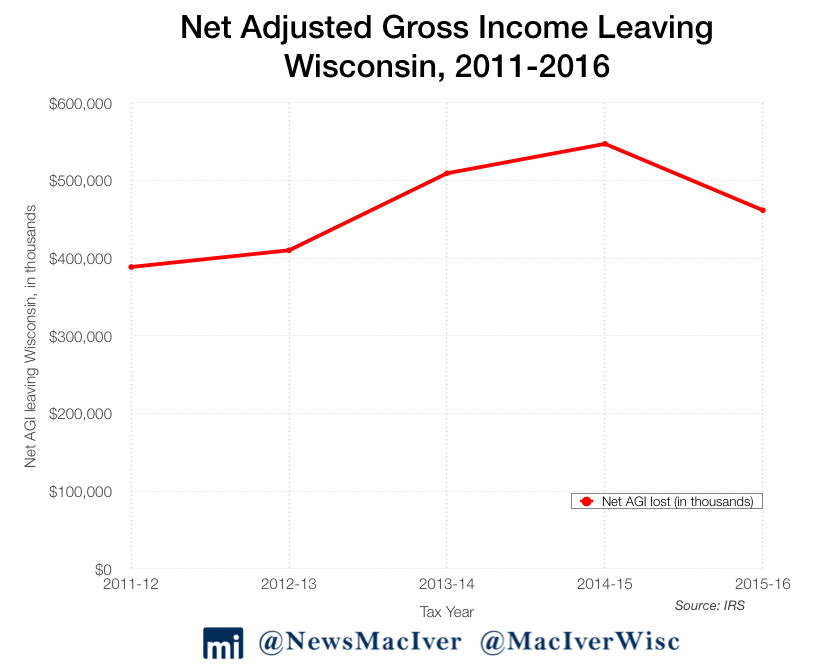 But instead of welcoming new residents, those who are already here are packing up and leaving year after year. Even though the state’s total population is still slowly growing, thousands make the tough decision to pack up “home” one cardboard box at a time and move out of the state. They move out in the hopes of finding a better life and lower taxes elsewhere. It’s not a new trend – Americans have been leaving the Midwest and East for the South and West for some time. We should not, however, accept it as inevitable.

The Walker administration recently passed a $6.8 million initiative to attract young people and veterans to Wisconsin, touting its low cost of living. Clearly, the administration knows that we need new talent in the state to stay competitive and keep growing. With unemployment at record lows, the problem is no longer Wisconsinites finding good-paying jobs, it’s finding talented workers to fill the jobs we have. One way to attract those workers is by continuing to treat them better by lowering the overall tax burden. 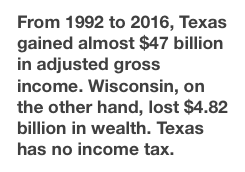 Texas, which has no income tax, has been a beacon in this regard. The Lone Star State attracts more domestic migrants than any other state, with an average of 519 incoming residents every single day in 2017. From 1992 to 2016, Texas gained almost $47 billion in adjusted gross income. Wisconsin, on the other hand, lost $4.82 billion in wealth.

Census Bureau statistics show where Wisconsinites go when they leave, and where new Wisconsinites came from when they arrive. Overwhelmingly, Badgers are moving to Florida, Arizona, Texas, and Colorado, all states with lower tax burdens than Wisconsin. New Wisconsinites – including yours truly – often hail from Illinois, which has the worst fiscal rating in the nation.

The numbers in Texas show a similar story. The majority of new residents are coming from high-tax states with poor fiscal health such as California, Louisiana, Illinois, New York, and New Jersey.

The tax burden isn’t the only reason why people choose to move, but it cannot be ignored. Capital flows to where it is treated best. To welcome new residents to Wisconsin and keep our economy flowing, the state should consider lowering taxes across the board.