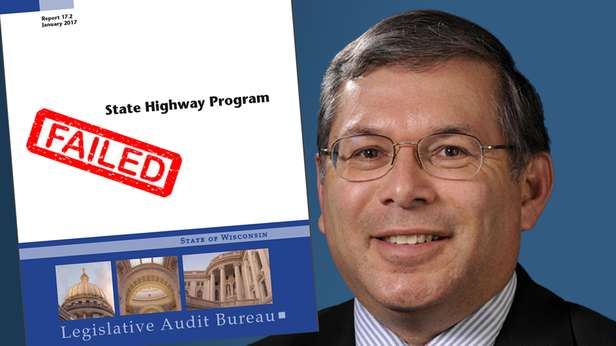 It’s hard to see how former Department of Transportation Secretary Mark Gottlieb could look worse after the recent report by the Legislative Audit Bureau (LAB). No audit of any state agency is going to look pretty, but what came out of the LAB looks like it could have been written by Mary Wollstonecraft Shelley.

It’s hard to imagine that any agency crying poverty as much as the Wisconsin DOT could be so reckless with the taxpayer dollar. You’d think the Board of Regents was running the DOT.

Let’s start with the most basic responsibility of the agency, picking contractors for road projects. The audit found, “DOT potentially could have saved $44.7 million, or an average of $4.5 million per year, if it had received two bids on each of the 363 construction contracts that had actually received only one bid from January 2006 through December 2015.”

The 363 projects represent 16.2 percent of the contracts awarded in that period, totaling $1.1 billion in contracts that only received one bid. Not surprisingly, these one-bid winners were “6.7 percent more than the estimated amount that design engineers had determined.”

It was not until June of last year that the DOT decided to give contractors more time to look at construction plans before making bids, hoping this would encourage more bids. However, it’s limited to “prequalified contractors.”

While it’s a lot easier on DOT bureaucrats to only have one bid to choose from, over 36 construction projects per year with only one bid should have raised some flags that there’s a problem with the procurement process. Even the Sopranos faced competition on the garbage routes from rival organized crime organizations.

The audit also found that the timing of the bids hurt the taxpayers, too. As any homeowner knows, bids on work to be done on the house will always be cheaper in the off-season because the contractors are trying to lock in work to fill up the calendar. When the construction season is full-swing and every contractor is booked, the price of getting new windows or a roof on the house is going to go up.

The Wisconsin DOT knows this, too. Given the limits of Wisconsin weather, it’s not surprising that the DOT has tries to get “67.0 percent of the total contract amount solicited in a given fiscal year should be solicited from October through March.” The LAB confirmed the wisdom of the approach:

We examined all construction contracts executed from FY 2006-07 through FY 2014-15. We found that the winning bids submitted by contractors for solicitations held during the quarters from October through December and from January through March were generally lower, compared to the amounts estimated by design engineers, than the winning bids submitted in the other two quarters. As a result, DOT benefited financially when soliciting contracts from October through March.

However, the goals were not met. The LAB found that had the DOT met its goals, it could have spent $53.1 million less over the nine-year period, or an average of $5.9 million per year.

But what’s surprising in an agency supposedly strapped for funding is the bizarre behavior when the DOT did save money by soliciting bids during the proper times. According to the LAB,

DOT also indicated that if winning bids early in a fiscal year are lower than expected, or if it unexpectedly receives additional funds, it may later in the fiscal year solicit bids for additional contracts that otherwise would have been solicited in future fiscal years.

So when the DOT did the right thing by spending less by soliciting bids in the off season, it would then take the “savings” and do the wrong thing by soliciting bids during the summer months to spend the new-found money when those extra road projects would be even more expensive.

It would be like saving money on getting your driveway sealed because you signed the contract in January and then using the “saved” money in June for a new boat. You could smash a bottle of Dom Perignon on the side, “I dub thee, the Taxpayer’s Remorse.”

Did nobody at DOT say that perhaps the money would be better spent covering the cost overruns on the existing projects underway? Because while the DOT was crying poverty, it kept underestimating the costs of the projects in which it was engaged.

Here’s where the real money is lost, and the legislature bears part of the blame, too. The audit found:

The cost estimates reported for 16 ongoing major highway projects increased from an estimated $2.7 billion at enumeration to an estimated $5.8 billion as of August 2016, or by $3.1 billion. DOT budgeted to complete more major highway project work than could be completed with its available funding because it did not sufficiently take into account the extent to which inflation and unexpected cost increases would increase project expenditures over time.

At some point the state needed to say that it could not complete all of the major highway projects on the wish list. Instead, costs were underestimated as inflation and “unexpected cost increases” for the major projects more than doubled what was actually spent.

If DOT had provided realistic cost projections, perhaps the legislature could have prioritized better or forced the DOT to find savings earlier rather than wait for the audit. Instead, the legislature now faces the prospect of raising the gas tax substantially if it doesn’t want to borrow more money.

We’re a long way from where the Walker Administration found the DOT when it took office. Former Governor Jim Doyle played a shell game with transportation funding, taking $1.3 billion from the DOT segregated fund for other budget priorities over eight years. In Doyle’s last state budget, the DOT borrowed $1.34 billion to make up for it. An amendment to the state constitution now prevents such raids on transportation funding.

But four years after Gottlieb’s request for a jump in the gas tax and the creation of a “miles driven” tax was ignored by the legislature and the governor, the DOT hasn’t shown any self-discipline with the funding they’ve received. Instead, the DOT under Gottlieb has all the self-discipline of a teenage girl with Daddy’s gold card at the mall. Telling the legislature that everything is half off and hoping that they’ll never see the bill is not behavior that should be rewarded with an increase in the DOT’s allowance.